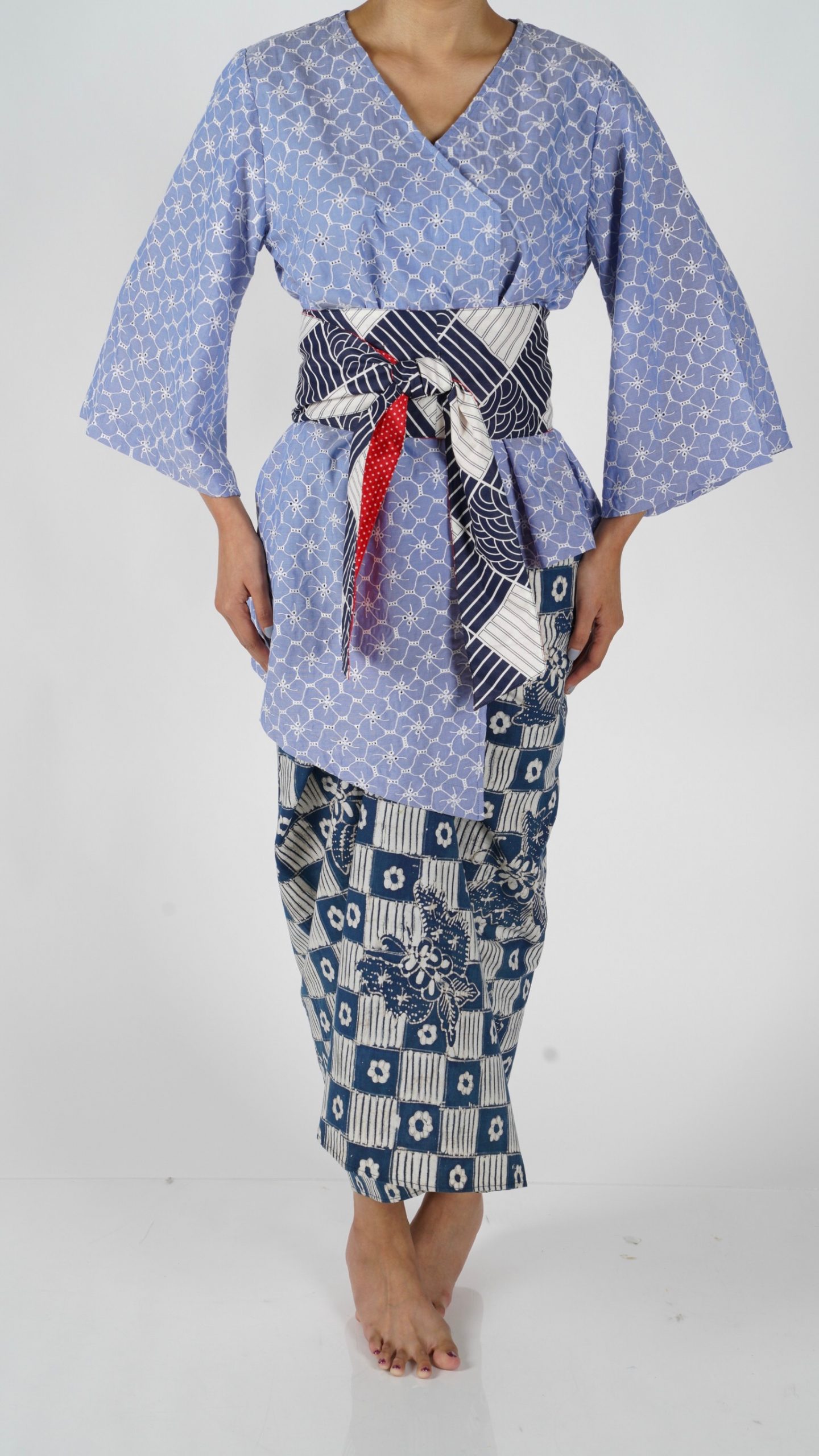 An asymmetrical Kebaya with a V-shaped collar. Kamisah is an understated beauty.
Who is Kamisah?
Kamisah is Nizam’s (Oniatta’s husband) maternal grandmother. Nizam recalls how he witnessed her dealings with a batik supplier-- a bespectacled fair-skinned man in his 60s, dressed in kain pelikat, with one basket full of batik.As a businesswoman in her 50s, she was direct and assertive. Kamisah sikd batik which she would acquire from the supplier to women in and around Kampong Tempeh. She was a central figure in Nizam’s life-- for she was the woman that held the fort, raising the three children while Nizam’s mother was at work.

Click on the WhatsApp icon to chat with our staff to order your very own baju.

Please fill in this form if you have any enquiries 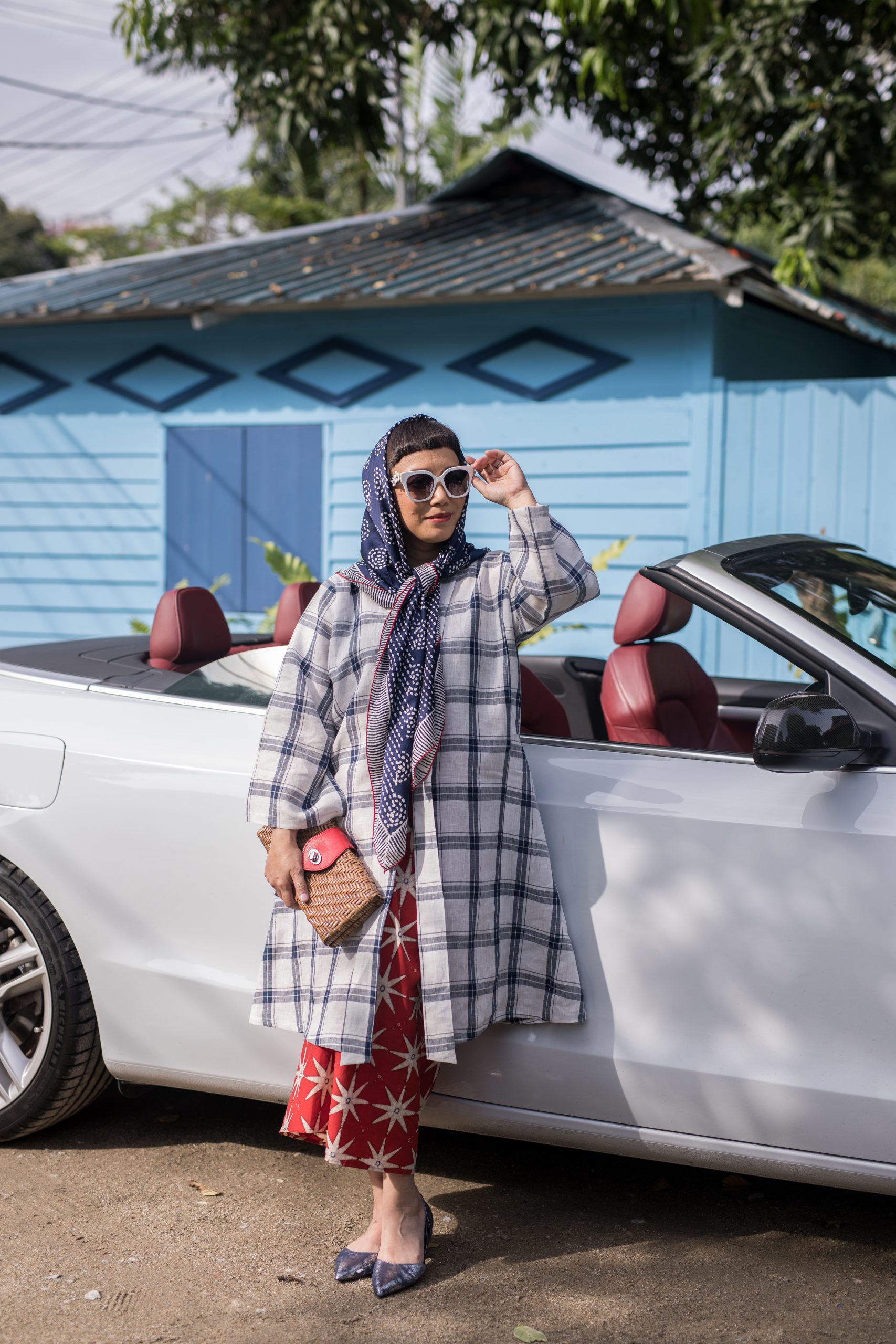 Senandung. A hum. A familiar tune. A serenade that brings comfort, and warmth. This year, we take a retrospective look on familiar silhouettes that define Malay traditional wear, together with the m... 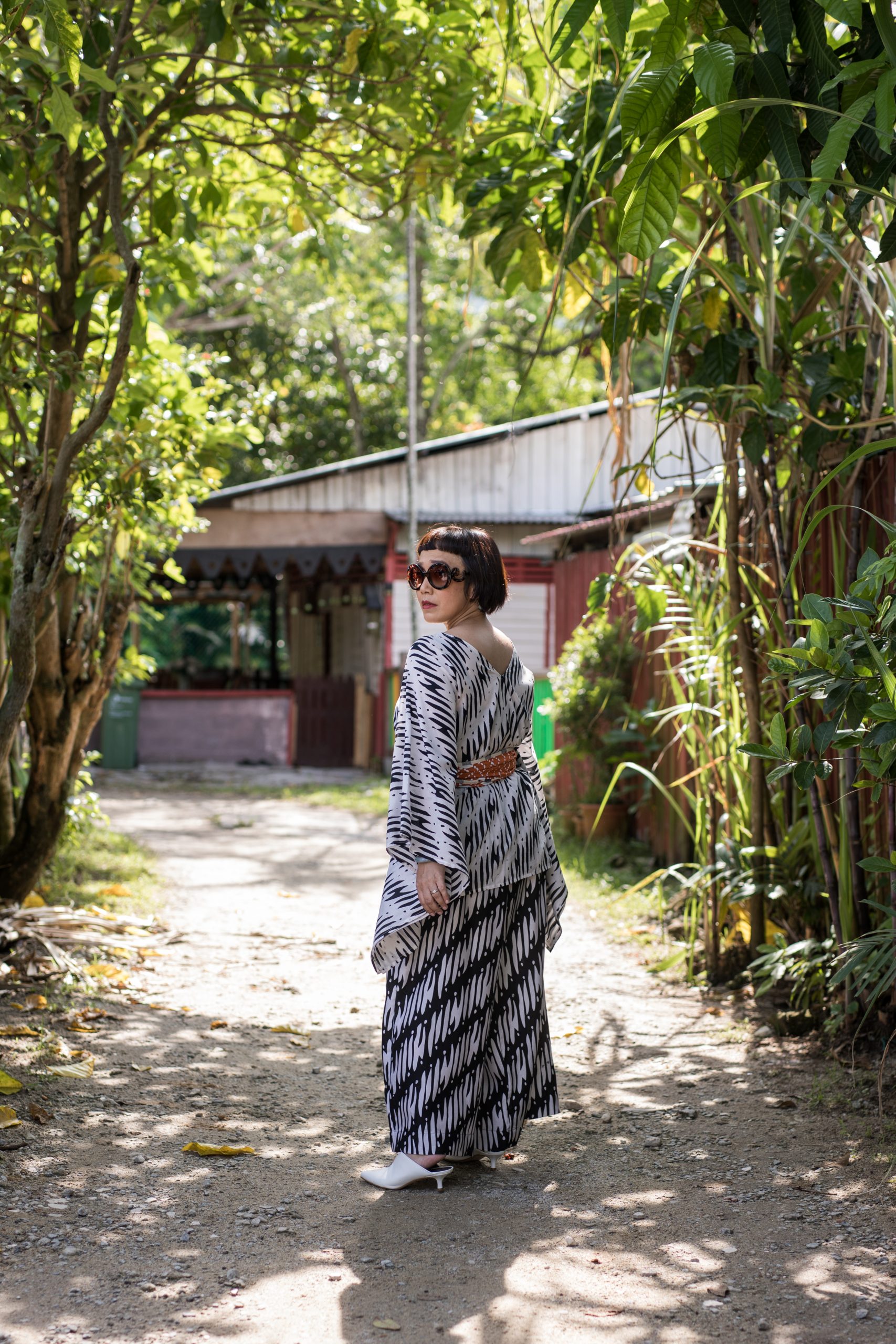 Macan [I], features the parang motif in batik chap (hand stamped batik with copper stamps specially created for this collection), which has been appropriated to mimic the transverse stripes of a tiger... 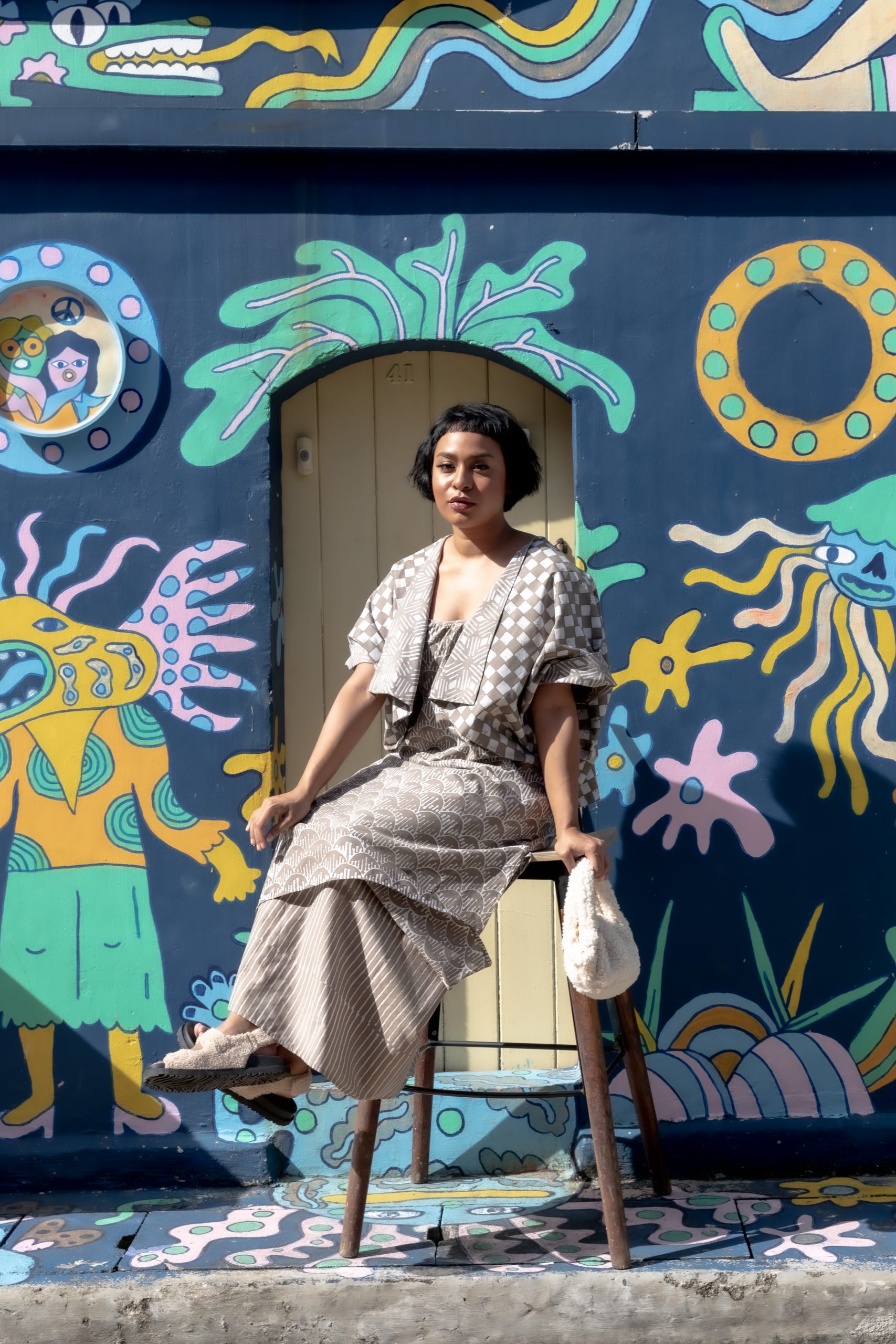 Alam | Bumi | Cahya (ABC) is inspired by Oniatta’s trip to Nice, the south of France. The collection features natural dyes in colours reminiscent of the Mediterranean Sea and sky, made with breathab... 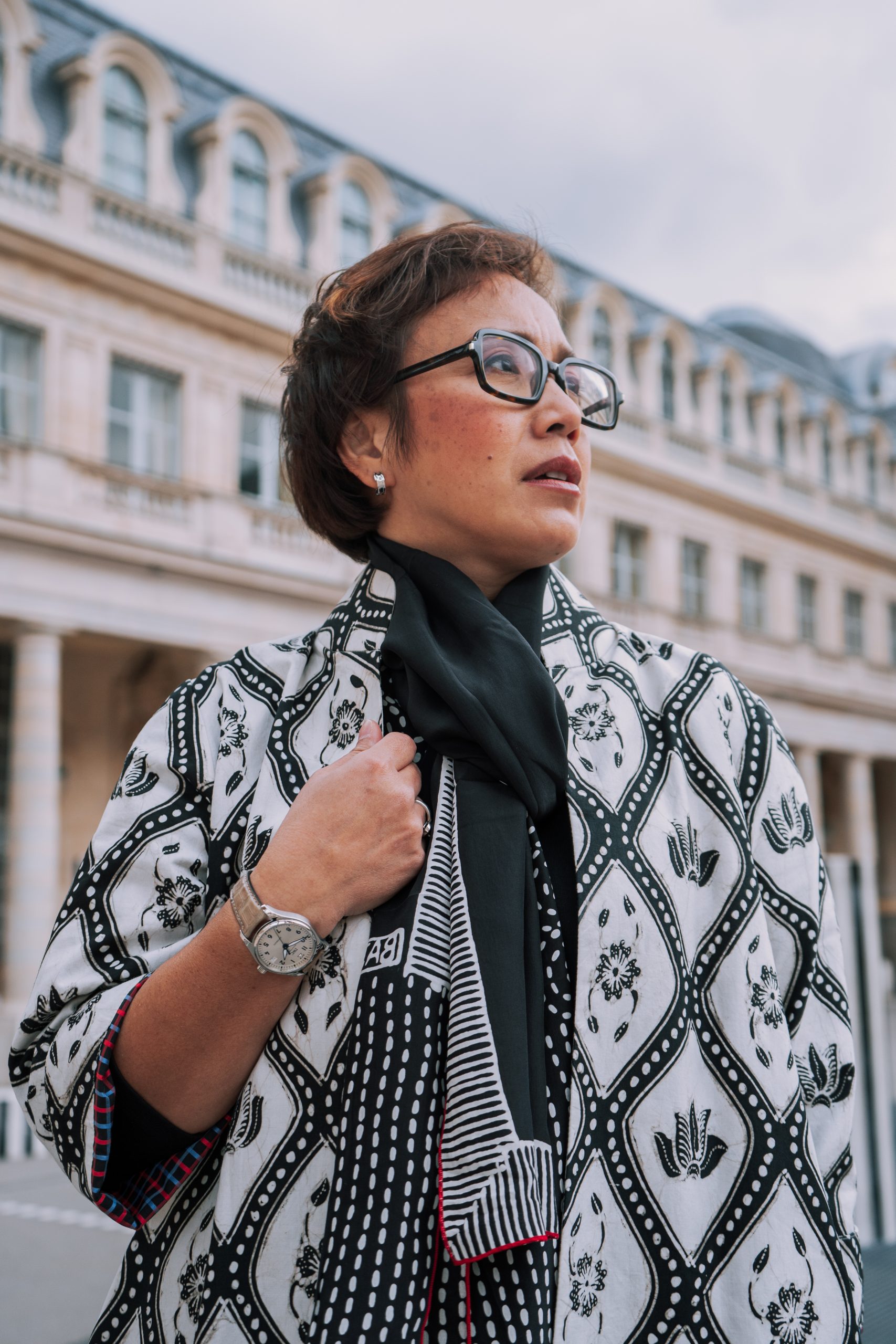 The special event, being our debut in Europe, will reprise batik motifs from the Kasih+Sayang collection which was first released in 2020. Kasih+Sayang is a celebration of love. The collection explor...

A found treasure. Beneath a stack of black and white pictures, a stash was that belonged to Oniatta's father. In a batik shirt. He dons the Sidomulyo motif. Batik Sidomulyo is structurally a geometri... 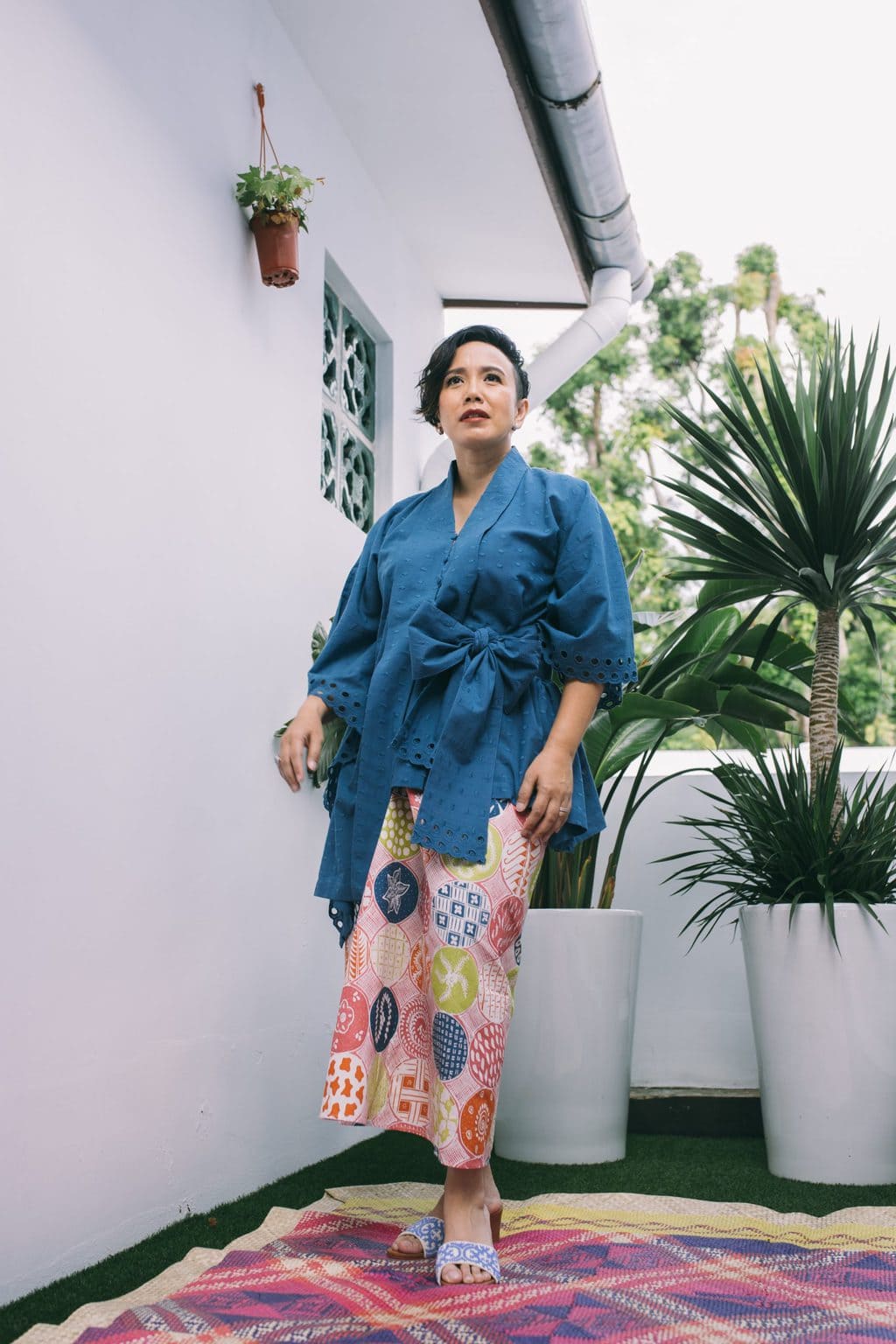 Lingkaran is inspired by the shape and motion of a circle that knows no end. This collection looks at coming full circle, signifying Baju by Oniatta’s move into Kampung Gelam as bringing batik ho... 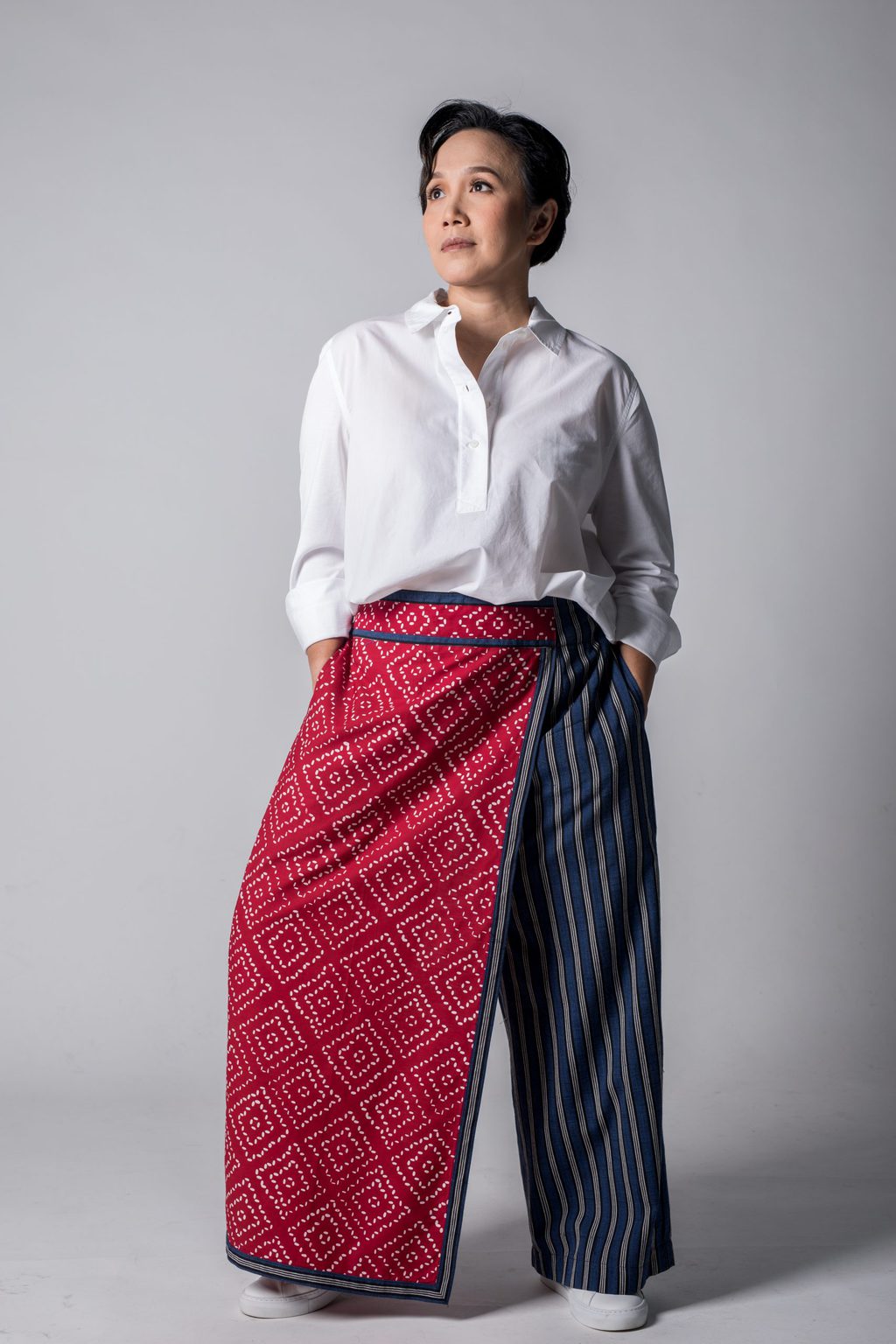 The sashiko motif is derived from the Japanese style of stitching/embroidery . This is the 2020 collection.

Kasih+Sayang is a celebration of love. The collection explores this through its expression in batik motifs. The motifs featured are Kawung Parang Sido Mulyo Truntum Merak Ngibing ... 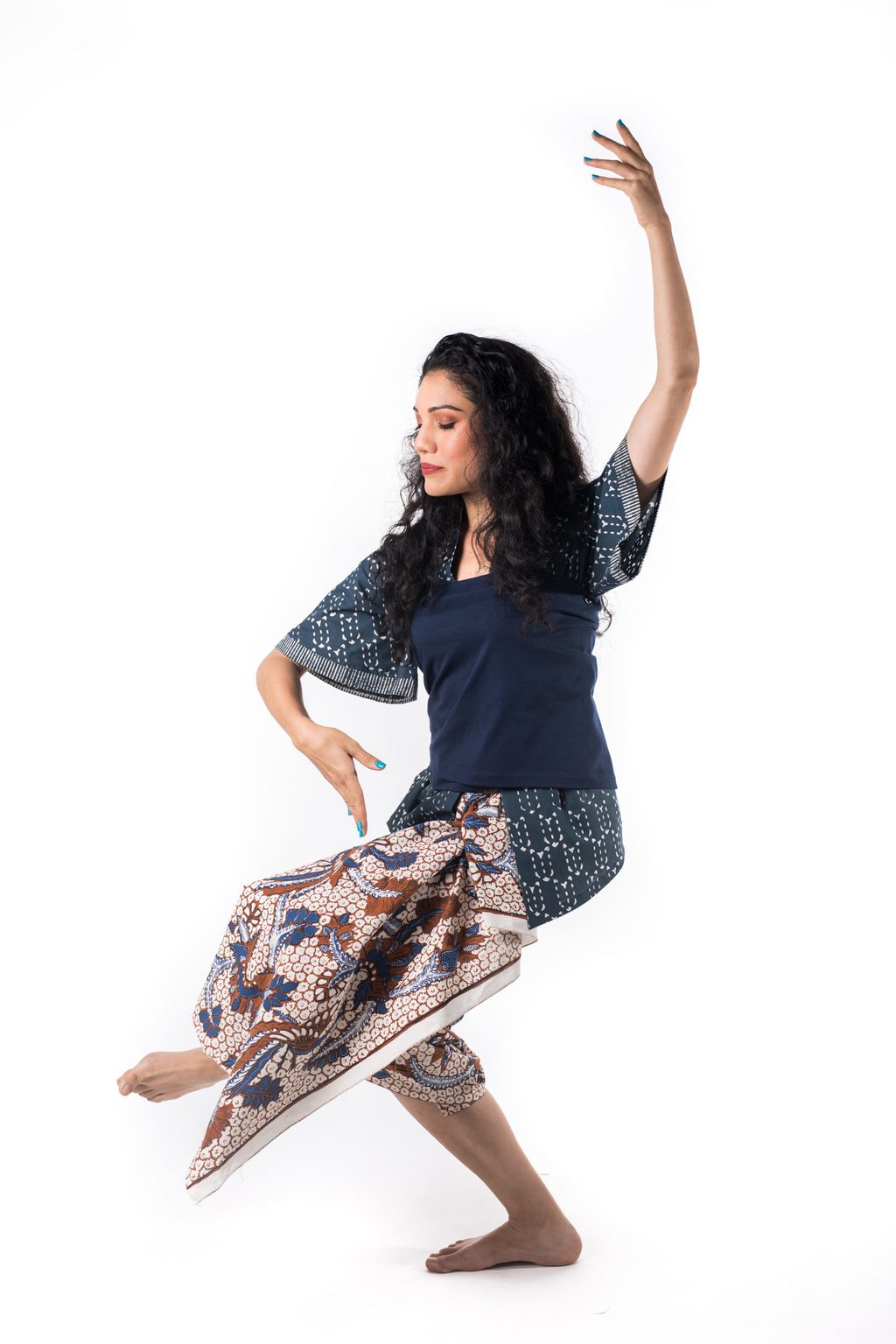 Oh Sashiko! celebrates a time-honoured tradition through the craft of batik making. Sashiko (literal translation: little stabs) is a form of decorative reinforcement stitching from Japan that start... 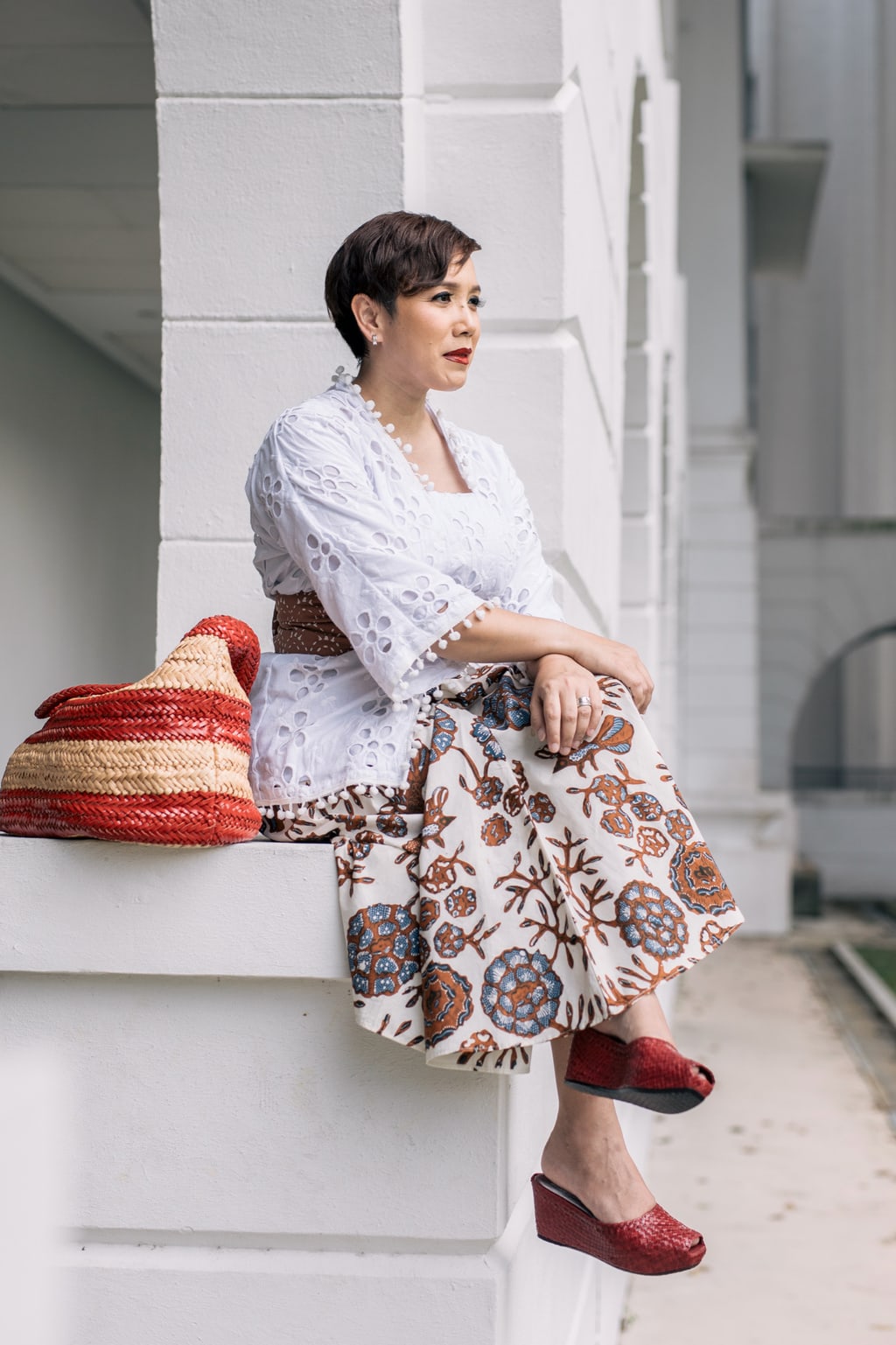 Nostalgia was birthed from a strong sense of longing. We all hold memories with us - sometimes of people, sometimes of buildings. Important places and people in our lives bring us back to a time when ... 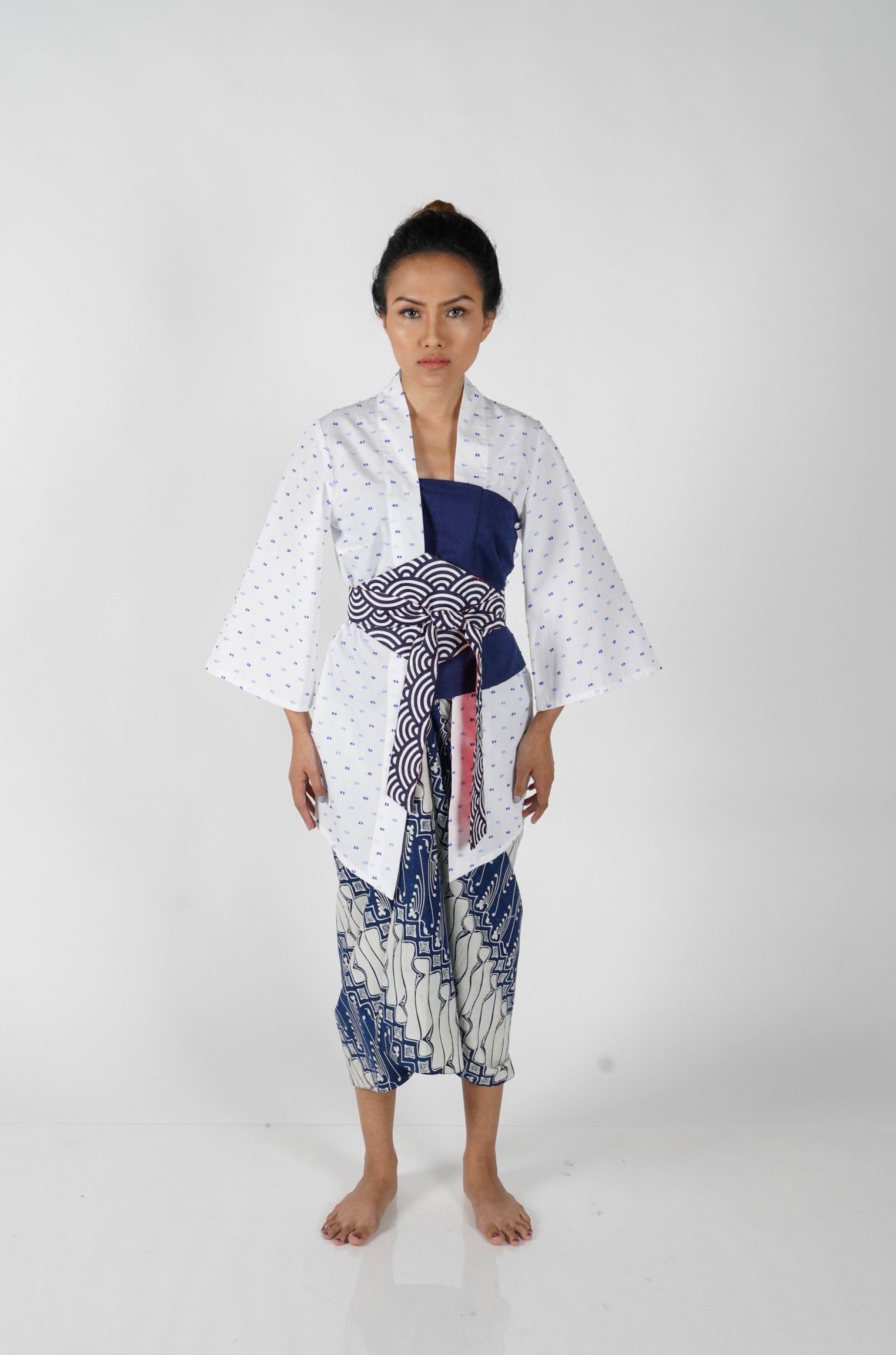 Biru: An Ode to Bunda Collection

Biru: An Ode to Bunda encapsulates the voices of strong women. Inspired by 4 incredible women, Oniatta designed this collection as a tribute to Mother. She recognizes the multiple roles women play and... 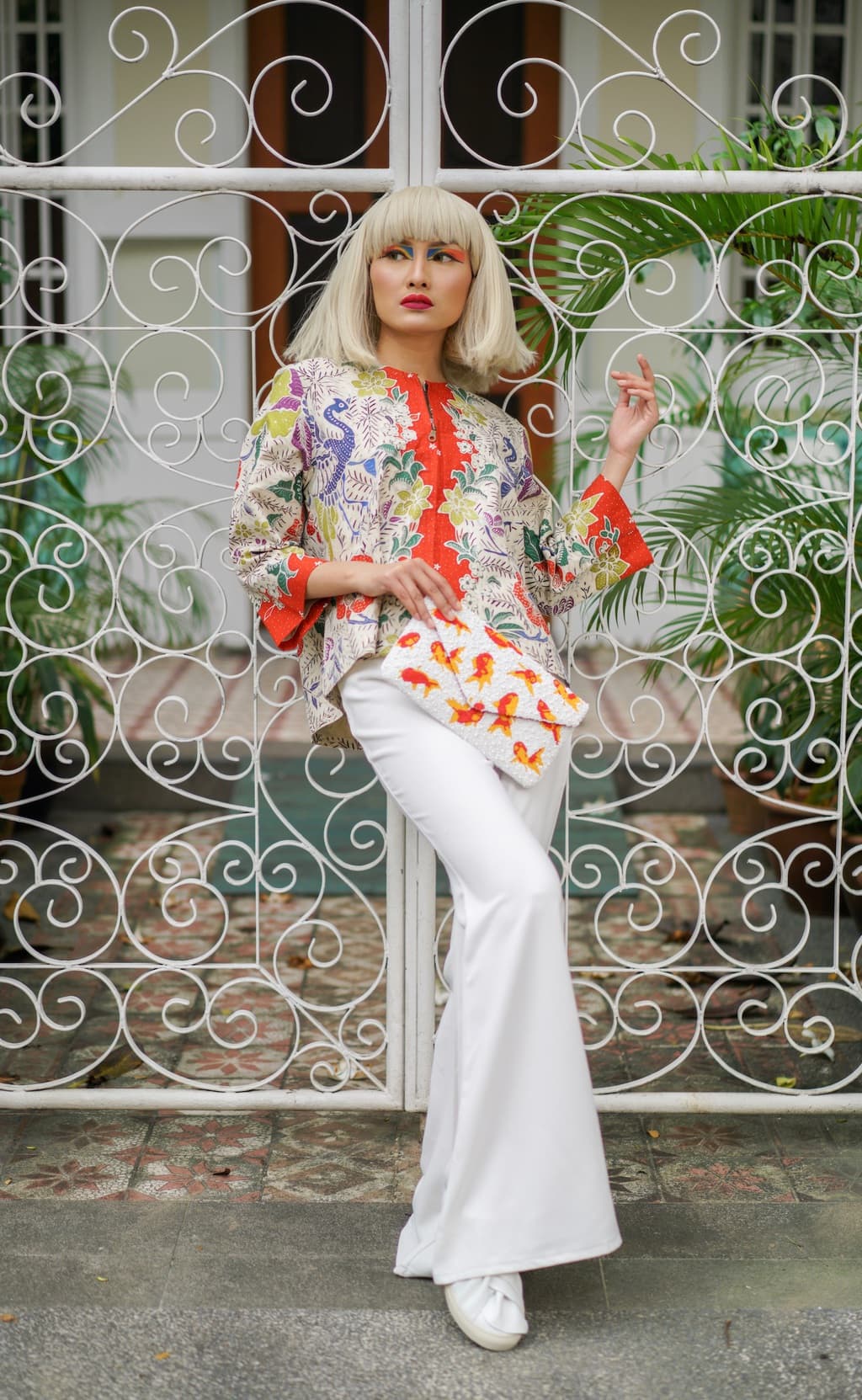 Warna: A Tapestry of Colours Collection

Warna is a celebration of diversity. While the craft of batik is intertwined with the cultural identity of the Indonesian people, its historical journeying is diverse. This collection acknowledges the...

Please fill in this form if you have any enquiries